We are excited to bring our 2021-2022 season back in person this year to our beautiful Valenzuela Theater!

We are happy to announce our mainstage line up for the season! Please check back soon for ticket sales announcements! 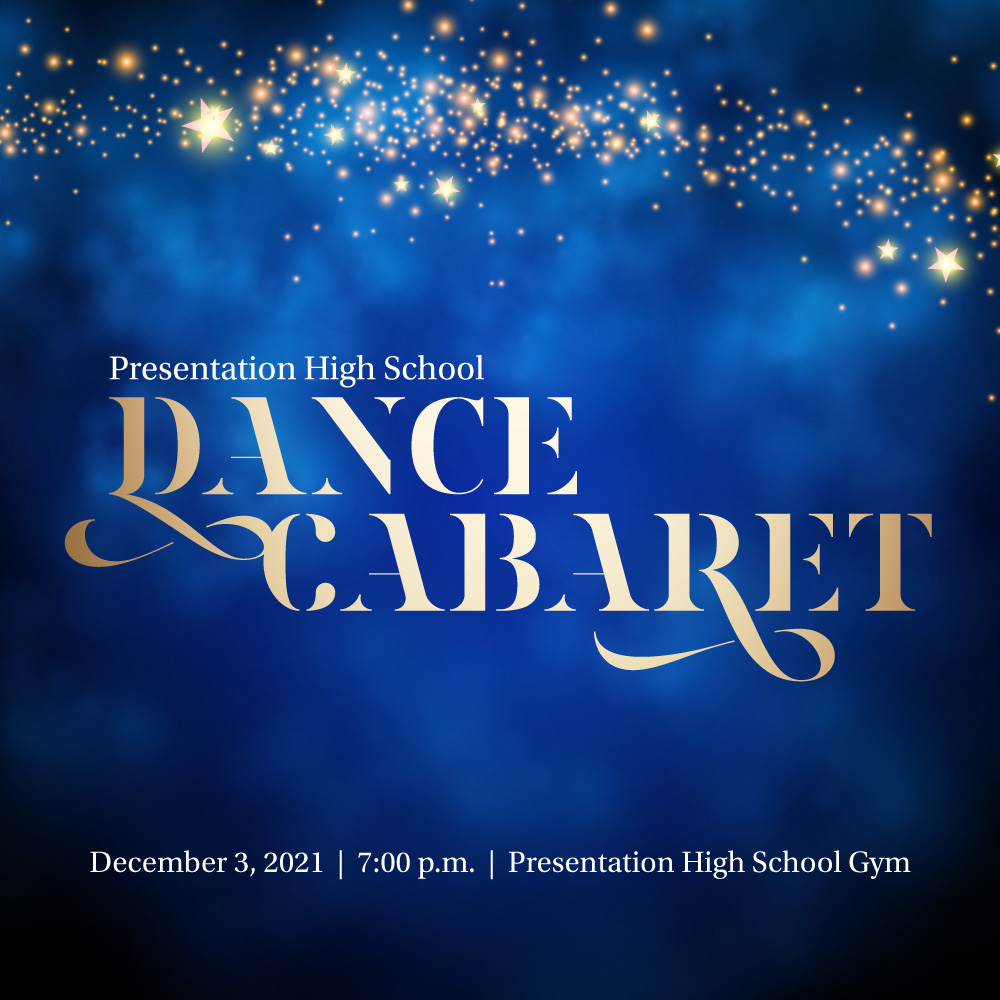 December 3rd at 7:00pm in the Presentation High School Gym.
Don't miss out on this amazing night of Dance and Choir. You will get a sneak peek to our National Champion Dance Team's competition routines as well as enjoy student choreography from our Dance Company, Dance I and Dance III students. Special Guests performances by Bella Voce and Cantabile Treble Choirs. Reception to follow. This is a must see show that is not to be missed.

Presentation's International Thespian Troupe is at it again! Join us for a night of music, dance and laughter, as our underclassmen steal the spotlight in this year's Underclassman Snip-ITS

Presentation choirs are proud to bring back our annual Carols and Cocoa Holiday concert in person! The concert will feature our advanced choir Bella Voce, our beginning choir Cantabile and our newly added intermediate choir A cappella. Please join us for an evening of caroling and drinking hot cocoa on Saturday, December 11, 2021 at St. Francis Episcopal Church, 7 p.m. Doors open at 6:30 p.m.

On a small Greek island, Sophie dreams of a perfect wedding — one which includes her father giving her away. The problem? Sophie doesn’t know who he is! Her mother Donna, the former lead singer of the 1970s pop group Donna and the Dynamos, refuses to talk about the past, so Sophie decides to take matters into her own hands. Sneaking a peek in her mother’s old diaries, she discovers three possible fathers: Sam, Bill, and Harry. She secretly invites all three to the wedding, convinced that she’ll know her father when she sees him. But when all three turn up, it may not be as clear as she thought! Told through the legendary music of ABBA, Mamma Mia! has become a worldwide sensation that has audiences everywhere dancing.

Share this timeless and enduring classic about the March sisters’ journey from childhood to maturity during the American Civil War. Audiences of all generations will enjoy acquainting — or reacquainting — themselves with the sisters: Meg, the eldest; Jo, the high-spirited tomboy; Amy, the self-centered beauty; and gentle Beth, as well as their beloved Marmee and Father. Together the March family learns to endure both good times and bad as they share the joys and pains of growing up.