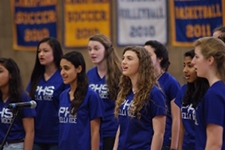 Bella Voce is the premier choral ensemble of Presentation High School, a private, Catholic school for young women located in San Jose, California. This choir program has enjoyed significant accolades in recent years, including Unanimous Superior ratings at the California Music Educators Association Large Group Festival in 2013, 2014, 2015, and 2016; invitations to perform in the St. Joseph’s Basilica of San Jose Season of Hope Concert series in 2013 and 2015, the St. Joseph’s Visiting Choir Series in 2015 and 2016, the San Jose State University Choir Invitational in 2015 and 2016, and were chosen as the featured performers for the San Jose Diocesan Choral Festival in 2014 and 2016. The choir frequently performs for events on the Presentation High School campus and throughout the Bay Area. Bella Voce was accepted to participate in the Choirs of America National Top Honors Choral Festival at Carnegie Hall in 2014 and the Heritage Festival of Gold at Segerstrom Center for the Arts in Los Angeles in 2015, where the group was chosen to be a Spotlight Performance for the closing Encore concert. The choir was delighted to make their international debut in 2016 as part of the Limerick Sings International Choral Festival and San Jose-Dublin Sister City Celebration 30th Anniversary Concert! Bella Voce has been chosen to perform at the upcoming CASMEC/CA ACDA State Convention in February 2017. Bella Voce is conducted by Ms. Julie Arthur.

Cantabile is an auditioned freshman ensemble. Previous experience is not required and all interested students are welcome to audition. Students will learn the basics of proper singing technique, explore various styles of choral music from multiple genres and time periods, learn to read music, begin basic music theory, and work on sight signing, rhythmic reading, and ear training.

Members of Cantabile will enjoy multiple opportunities to sing with and possibly even travel with Bella Voce. Involvement in Cantabile will give students the tools to later audition for Bella Voce as a sophomore, junior, or senior if desired.

Voice Class focuses on teaching techniques involved with solo-singing, differing from choir by offering an individual focus rather than group focus. Previous experience is not required.

Students will learn the basics of proper singing techniques, explore various styles of music from multiple genres and time periods, ranging from opera to music theater to folk to pop, learn to read music, begin basic music theory, and work on sight signing, rhythmic reading and ear training. The course will conclude with a semester-end music recital in the Valenzuela Theater.

Note: Tickets are available at our online box office.